Santa Claus, IN is home to the surprisingly large amusement park, Holiday World. To our surprise, the park was open. We avoided it like the proverbial plague and literal pandemic, opting instead for an almost-empty Christmas shop and candy store before driving on to Mount Vernon, IL. We pulled into our hotel’s parking lot in Mount Vernon, spilled out of the van, and began our 10-bag unloading ritual. As I hauled load #1 of bags into the hotel, Careese opened our cooler to retrieve a snack or two for the kids. (Last year, our parents gave us a super-handy car cooler to take along with us on our road trips. It plugs into the car’s power outlet and cools as we drive. Brilliant!) When Careese opened the lid to the cooler, she was punched in the face by a simultaneous whiff of putrid rank-ness and blast of hot air. Hot air? Why was it hotter inside our cooler than it was outside the van on a 90+ degree day? Figuring out “why?” would have to wait. We had more pressing problems. For starters, we had stored all of our delectable goods from the Hershey factory in the cooler. Our "cooler" was now home to a veritable cornucopia of melted Hershey goos. Reese’s goo. Milk chocolate goo. Dark chocolate goo. Hershey kiss goo. And, there was even worse news. In addition to our Hershey goodness, we had stored our Amish food treasures in the cooler. So, in addition to various kinds of chocolate goo, we had three different kinds of cheese goo and a variety of grossly gooey meats. Tragedy had befallen us. As Careese sifted through the carnage, the news became even worse. 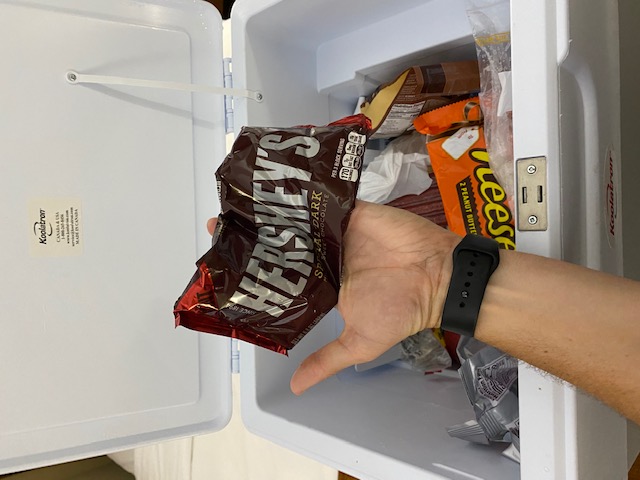 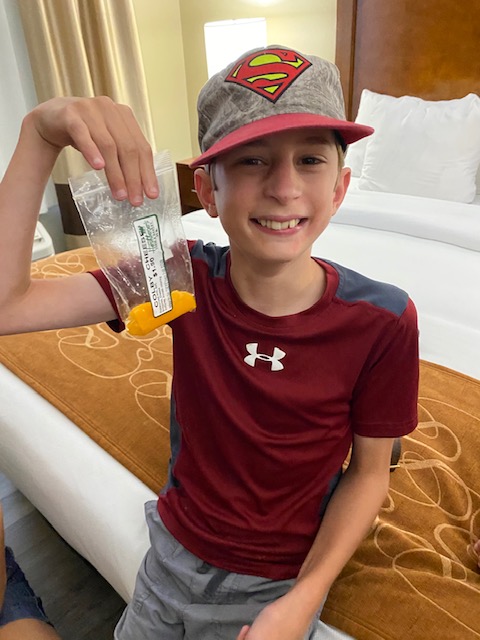 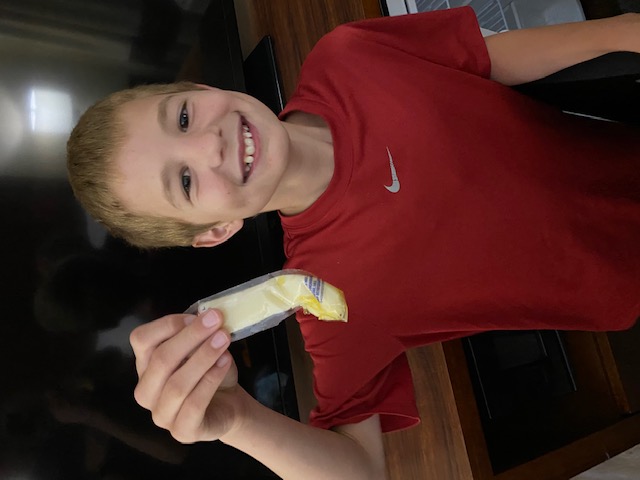 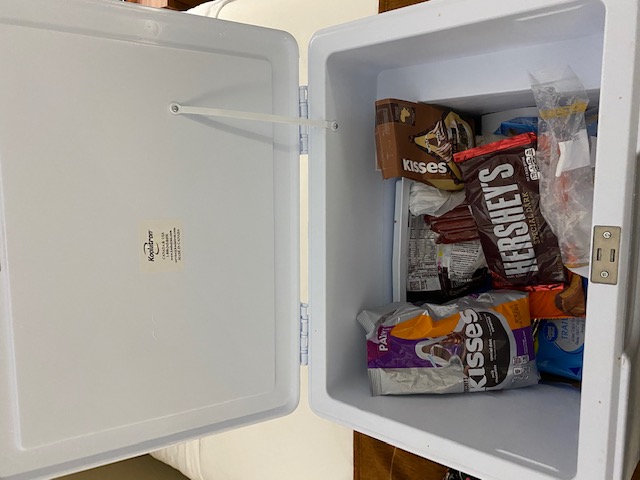 Now, I need to tell you another story that I had previously omitted from my posts. I omitted it, because it didn't seem like a big deal at the time. After our stop in Amish Country, I had added a bag of ice to the cooler. I wanted to do everything in my power to keep my treasured Amish food cold and preserved. Unfortunately, the bag of ice had not been totally sealed. As the ice melted, our food was left sitting in a few inches of water. This wouldn't have been a problem except that we had packed the bottom of our cooler with boxes of granola bars. These cardboard boxes had virtually disintegrated after sitting a day or two in standing water. Did we take the boxes out of the cooler and clean it out as soon as we discovered this mess? Nah, we procrastinated since it wasn't ruining the food. That brings me back to our hot cooler issue. Our bags of goo were sitting atop an unsturdy foundation of disintegrated cardboard boxes and melty/gooey granola bars. Even worse, Careese discovered that someone had shoved a bunch of cellophane-wrapped chocolate chip cookies into the bottom of the cooler many days prior. (Full disclosure: it was me. I was "someone.") Those cookies had been through the gauntlet over the course of a few days. First, they were soaked in a pool of chilled water--just long enough for the water to seep in and change the composition from tasty cookie to cold, gritty, cellophane-wrapped cookie soup. Just after the aforementioned nastyfication process was complete, our cooler had heated the bundles of cookie soup to the point that it seeped out of the cellophane and into the bottom of the cooler, mixing in with the disintegrated cardboard. The resulting mixture was, well, revolting. To sum up, our cooler now contained: A foundation of cookie mush and disintegrated cardboard. A middle layer of gooey/soggy granola bars. A top layer comprised of a disgusting mess of cheese, meat, and chocolate goos. After cleaning up the mess, we finally figured out what had gone wrong. And, no surprise, it was my fault. And, also no surprise, I did my best to cast the blame elsewhere. Actually, I still do. You see, our cooler was not, in fact, a cooler. It was a fancy, dual-function, Koolatron heater/cooler. As it turns out, if you connect the power cord one way, it cools. If you connect it the other way, it heats. If I'd so much as glanced as the instruction manual that came with the thing, I would've known that. Alas, I did not. From the Koolatron website:

"Easily warm your food or snacks to 149 F, or 65 C– Use it to keep your take-out food warm or transport picnics, or warm dishes to a family gathering."

That's why it felt so hot in there. It was 149 degrees. ONE HUNDRED AND FORTY-NINE DEGREES! Oops. 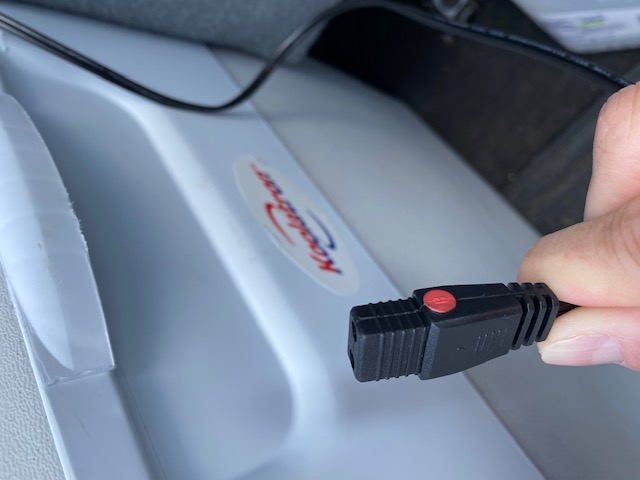 What will we remember about Mount Vernon, IL? The quaint little historic district we drove through? The patriotic little museum we took pictures in front of? No, we will remember the tragic loss of our treasured Amish food and candy. Oh, and I'll remember one more life/marriage lesson from the trip. Each morning, we’ve chosen a local coffee shop as our first stop of the day. It’s one of my favorite things about traveling. Notable winners in the “Josh & Careese try lattes across America” awards: The Ugly Mug in Gettysburg and Heine Brothers Coffee in Louisville. As we started driving in Mount Vernon, IL, I was unable to locate a local coffee shop. So, I made the executive decision to skip coffee for the day and drove right on past Starbucks to our first destination. (For what it's worth, I'm certainly not opposed drinking Starbucks coffee, I just prefer local joints.) As we approached our first sightseeing stop, my wife gave me a quizzical look. “We’re not stopping for coffee?” She asked. “I thought we’d skip today,” I replied. The look on her face informed me that I had made a horrible decision. It was a look that I imagine many husbands get from their wives when they make a poor, arbitrary decision for the family without consulting anyone else. It was an “I’m about to send a fully armed battalion to remind you of my love” kind of look. A tip for you husbands out there: always consult your wife before making important life decisions...like deciding whether or not to stop for coffee in the morning. 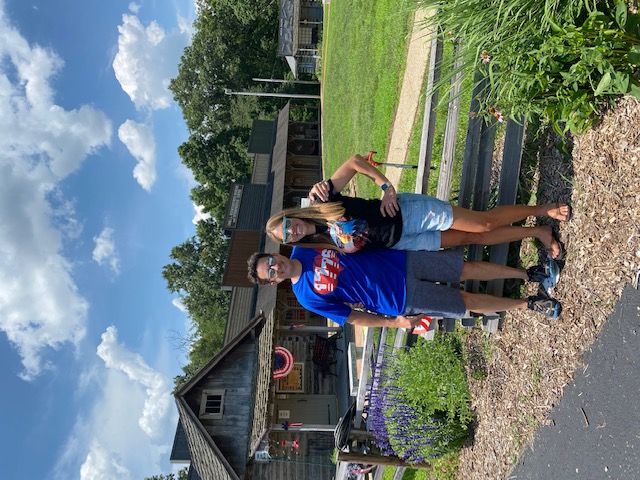 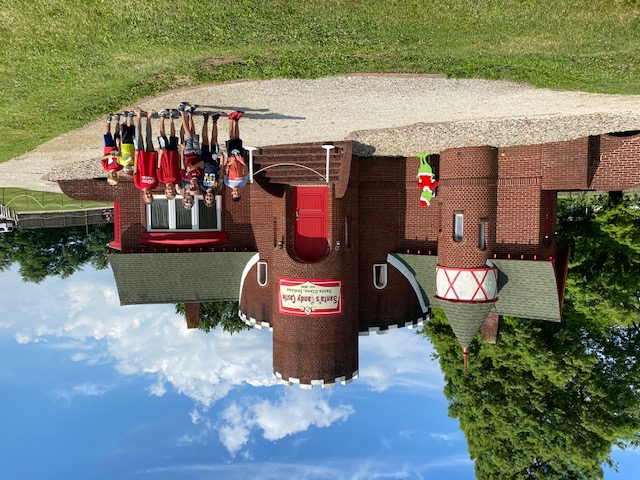